History of the Vanstone Mill – In 1794, the first three pioneer families came to the area we now call Bowmanville.  The Burks, Trulls, and Conants fled the American Revolution and came to settle what became Darlington Township.  The Burks built a saw and grist mill on Bowmanville Creek (then known as Barber’s creek) around 1820, which was succeeded by the larger, present day mill in 1850. 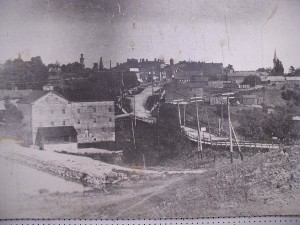 The new mill, sometimes referred to as the Burk Mill or Simpson Mill, was owned by John Burk and his partner John Simpson. They later rented it to Samuel Vanstone, and eventually sold it to his son Jabez in 1886.   Jabez Vanstone made repairs to the dam and replaced the grinding stones with rollers. Around this time the mill was producing 150 barrels a day of various brands of flour. After Jabez’s death in 1902, his son Fred Vanstone continued to operate the mill and later passed the business to his sons. Milling operations stopped in the mid-1970s, but the dam was used to produce electricity for Ontario Hydro until the mid-1980s.

Bowmanville: Then and Now by Charles D. Taws and Clayton M. Morgan