The mill was the lifeline of any growing community back in the days of early settlement. Port Darlington was blessed with two creeks and seven mills at one time. One of these was housed in the present Visual Arts Centre at Simpson and Baseline Roads in Bowmanville. This building has maintained a steady contribution of one sort or another to the town ever since.

The walls inside the red brick building beside Soper Creek are lined with brightly coloured childrens’ paintings. On the first floor is a table full of clay models and in the background you can hear the sounds of an art class. Sturdy wooden pillars are the only reminder that this building once housed the heavy machinery of an operating mill.

Ontario Mills, Mackay’s Caledonia Mills, Cream of Barley-these are just a few names that ring from the past of the Visual Arts Centre. Its story is one of colourful owners, of firsts and innovations, all of which contributed to the growing community of Bowmanville.

It was started back in 1814 when Timothy Soper bought 94 acres of land from Augustus Barker, complete with its own source of waterpower. Soper opened up one of the first saw mills in the Darlington area that year. His only other competitor at that time was John Burk who operated grist and saw mills to the west on Barber’s (Bowmanville) Creek where the Vanstone Mill now stands. A gristmill was opened 11 years later in 1825, which Soper called Ontario Mills.

Between 1877 and 1886 the mill changed hands several times. It was then that John MacKay, alias the “Barley King of Canada” and a miller by trade, purchased the mill and launched it into new prominence. He called his business Caledonia Mills and specialized in the manufacture of pot and pearl barley. MacKay, known to be a quiet man in private, was quite renowned in the barley world. He won awards at expositions in many parts of the world, including a bronze medal for a pearl barley machine in Buffalo in 1873, a silver medal for pearl barley in Jamaica in 1891, not to mention a diploma for barley at Wolverhampton Industrial Exhibition in 1902. He even patented his own equipment which ground a very fine grade of flour and had it installed in the mill.

In 1894, a Globe article described the wooden mill as “one of the busiest of the busy spots in Bowmanville that is known the world over almost.” Indeed the Barley King’s products were sold not only across Canada but also in the U.S. and Commonwealth countries. By 1894 the mill was operating 24 hours a day, with the exception of Sundays, and arrangements were made to enlarge the facilities. The mill burned down in 1904, two years after John MacKay’s death. It was quickly replaced with the present red brick structure and before long business was booming again, supplied by a combination of water power and a 120 horsepower engine.

During and after the First World War a wheat shortage stimulated business in barley products. The mill evolved into Cream of Barley Mills, named after its breakfast porridge product, which was not unlike the present day Cream of Wheat. Older residents recall Cream of Barley as a mainstay at the breakfast table each morning. 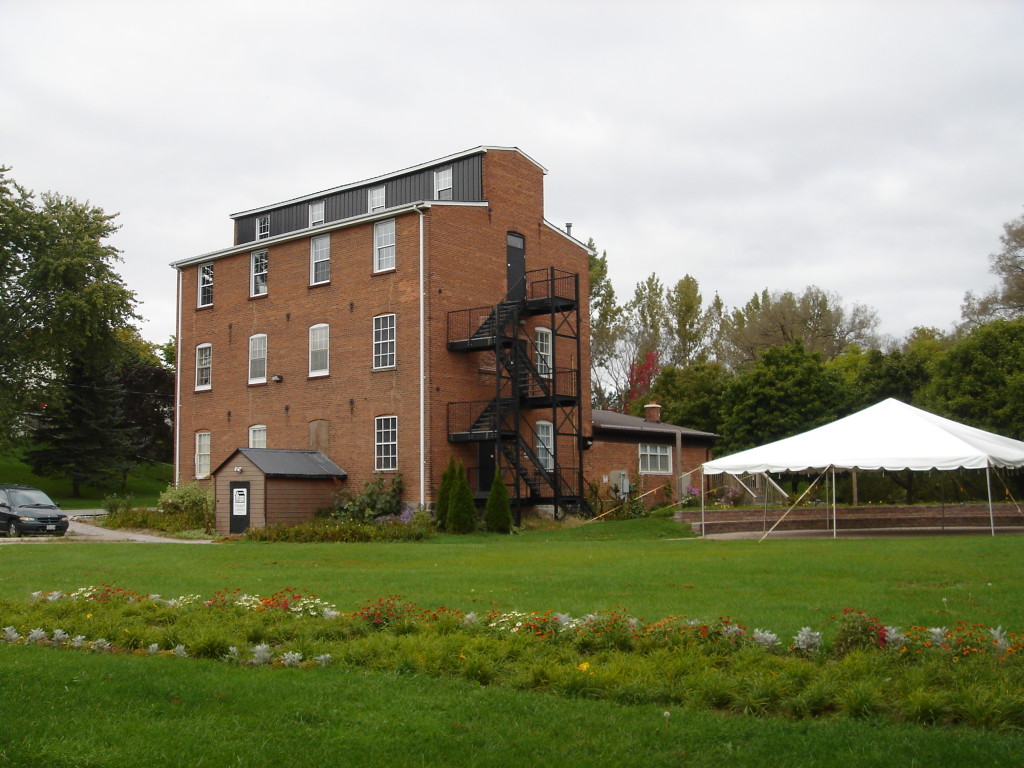 By 1929 a new phase of the mill had begun. It was then that James Lake Morden made one of the smartest business moves of his career-he married John MacKay’s daughter Gertrude and, in doing so, acquired ownership of the Mill for the grand sum of $1. Morden, says Stu Chandler, a former miller at Vanstone’s, was the type of man “who could swear backwards faster than most people could swear forwards.” He was also known as “the colonel” according to Merle Slute, a former teacher at the Visual Arts Centre. He described Morden as a man who sported a goatee and who looked not unlike Colonel Saunders. Morden described by Chandler as “sharp as a tack,” a man known for his business acumen. Capitalizing on the golf craze, he opened up the first golf course in the area. He also took advantage of the burgeoning tourist trade by opening up the Cream of Barley Camp, located on the present site of the Bowmanville Zoo. “It was beautiful,” says Nora Allin, daughter of the famous runner Alfie Shrubb, himself a past owner of the mill and operator of the camp. “It had a tennis court, a swimming pool, an archery range, a quarter mile cinder track and cabins for the tourists,” says Mrs. Allin. Never one to be content with the status quo, Morden tried several promotional gimmicks to boost the sale of his products. He sent Garnet Mutton and Arthur Hearl of Bowmanville across the country to plug the product by giving out free samples.

After the illustrious Mr. Morden died, ownership of the mill passes into the hands of Alfie Shrubb in 1946. The former runner moved into Reay cottage at 111 Simpson Drive, Bowmanville, which had been the homestead of past owners all the way back to John MacKay. As for the mill, it had already seen its heyday and started to decline under Shrubb’s ownership. The new trend towards prepared breakfast cereals didn’t help any.

In the late 1950’s he sold the mill to Leo Bierman, an immigrant from Czechoslovakia. Bierman tried to resurrect the business. He had the barley shipped from Winnipeg but after one year he took the entire operation there and brought an end to the age of barley at the red brick mill.

The old building stood empty until the local Rotary Club purchased the Mill property in 1965 and used it as a drop-in centre. Finally in 1973, the town of Bowmanville acquired the Mill for the same price as Mr. Morden paid back in 1929-$1. Council agreed to allow the building to be used as a Visual Arts Centre.