Creek videos would give important information on health of the watershed, say volunteers 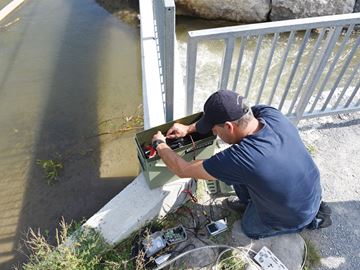 CLARINGTON — A group of Bowmanville creek volunteers wants to know how many fish are making it up the new fish ladder to successfully spawn in the cool waters upstream.

The Bowmanville Creek Conservation Group wants to install cameras at the top of the ladder. The cameras will stream video online and help the conservation group determine how many fish are making it up and down the stream. An underwater camera would help identify the types of fish making the journey, while an overhead camera would help with the counting.

“The data they can collect off it is essential to have the river in top quality condition,” said Dave Lawson, from the Bowmanville Creek Conservation Group. “If the numbers of fish start to drop, you know there is a problem with the watershed.”

On Thursday, Sept. 24 Chris Bunt from Biotactic Inc., a Kitchener company which specializes in fish and wildlife research, brought some of the technology to the Bowmanville Creek fish ladder for a demonstration. He said the video produced can produce real data — not estimates — on how many fish make it upstream, and how many fish are born and move downstream towards the lake. It can also determine how many fish are tagged or how many are carrying lampreys with them. 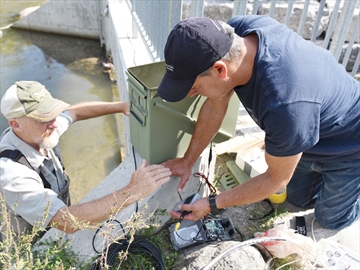 “What proportion of fish down there are going to make it up here? You don’t know. That’s what these systems are for,” said Mr. Bunt.

The cameras are motion triggered to record only when there’s something interesting happening in the water. The lenses “blink” to clean off the dirt that accumulates. The cameras can be powered by solar panel. A lab in Kitchener will take the video collected and automatically count the fish using the creek. The video is also streamed directly online, which could be viewed by classrooms or anyone interested in the local watershed.

Buying and installing the camera system, plus two years of data analysis, costs $20,000. After the first two years, the cost for data analysis is $5,000 a year.

“Hopefully we can get it in the future for the educational value of it,” said Mr. Lawson. “We’re going to have to do some fundraising to come up with the revenue to have one put in here.”